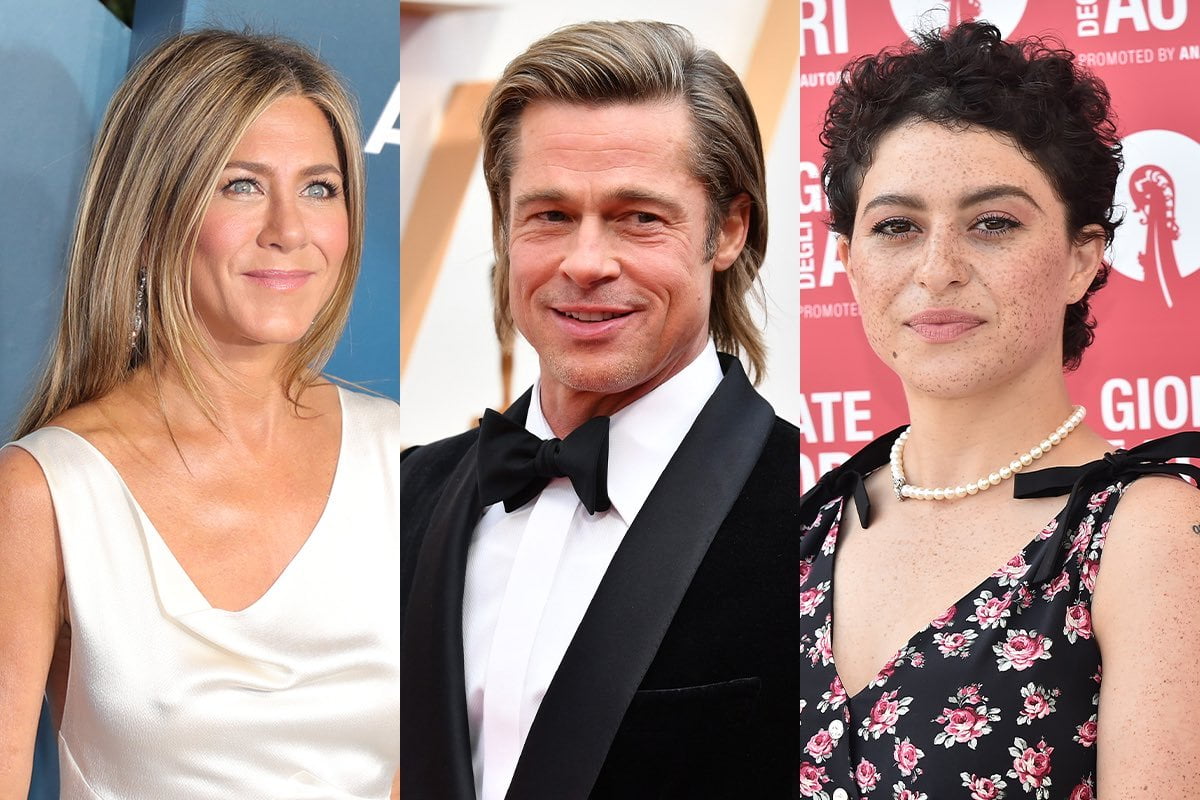 In Touch reports that Brad Pitt has been having an affair with actress Alia Shawkat, despite having “quietly rekindled his romance” with Jennifer Aniston. Shawkat has been spotted entering Pitt’s gated community multiple times over the past few weeks, which the publication reports they’ve begun a romantic relationship. The new affair, an insider says, has left him “torn” between his new love and Aniston. “He’s got a big decision to make about his future,” says the tipster.

Though it’s clear that Shawkat and Pitt have become close, Gossip Cop and others have previously reported that they are not dating, they’re just friends. Tabloids are constantly claiming that Pitt and Aniston are restarting their romance ever since they split up 15 years ago. Gossip Cop reached out to a source close to Pitt to find out more, who laughed off the ridiculous premise and pointed out that you can’t cheat on someone you’re not in a relationship with in the first place.

In Touch loves stirring up drama between Brad Pitt and his exes. Back in 2017, the magazine claimed that Jennifer Aniston and Pitt were teaming up for a movie to get revenge on Angelina Jolie. Last November, Jolie was allegedly plotting to move with her and Pitt’s six kids to Africa without telling him. These articles might be good ideas for storylines on a daytime soap opera, but unfortunately, not for real life. 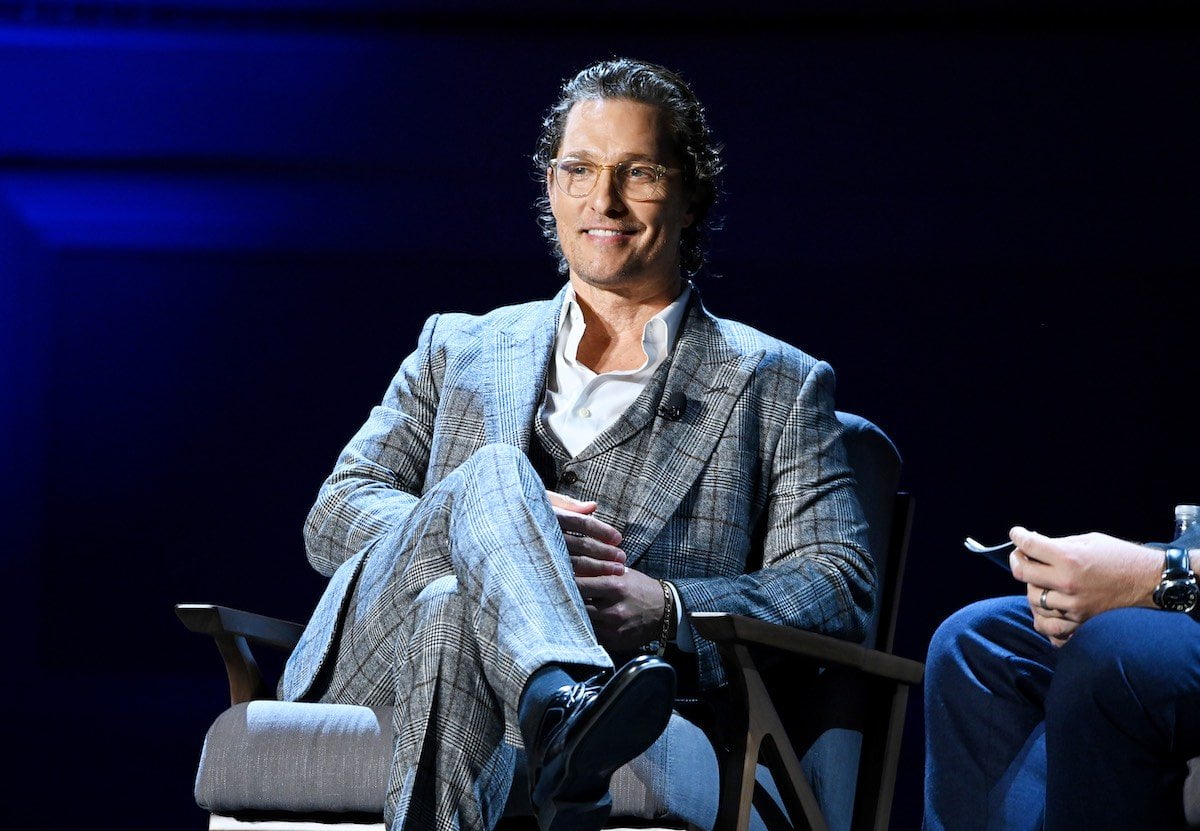 Matthew McConaughey Living In Airstream RV Away From Family

This week’s Globe reports that Matthew McConaughey has been living a life separate from his wife, Camila Alves, and three children in a luxury RV trailer. “Matt misses the good old days when he could do anything he wanted,” says one insider. “His mobile home away from home gives him the illusion that he’s still in control.” The source adds, “he doesn’t call it living separate lives but that’s what it is.”

Halfway into the article, however, the tabloid switches up its story to use less extreme language. Matthew McConaughey “retreats to his Airstream” whenever he needs a little “me” time, the source says. The tipster finishes by saying, “but he’s also got an independent streak that won’t be tamed and often takes his Airstream on solo road trips.”

As is often the case with tabloid stories, the article starts off with a strong stance that gets gradually watered down as it goes on. Gossip Cop reached out to a source close to the actor, who was not able to speak on the record but who assured us it wasn’t true.

It should be noted that the Globe just loves pulling the whole “separate lives” narrative. Last month, the outlet falsely claimed that Tom Selleck was living a separate life from his wife, Jillie Mack. Before that, it was Ellen DeGeneres and Portia de Rossi in January. It’s obvious that the publication would rather make up salacious tales of drama than just accept that most of these couples are happy and doing well. 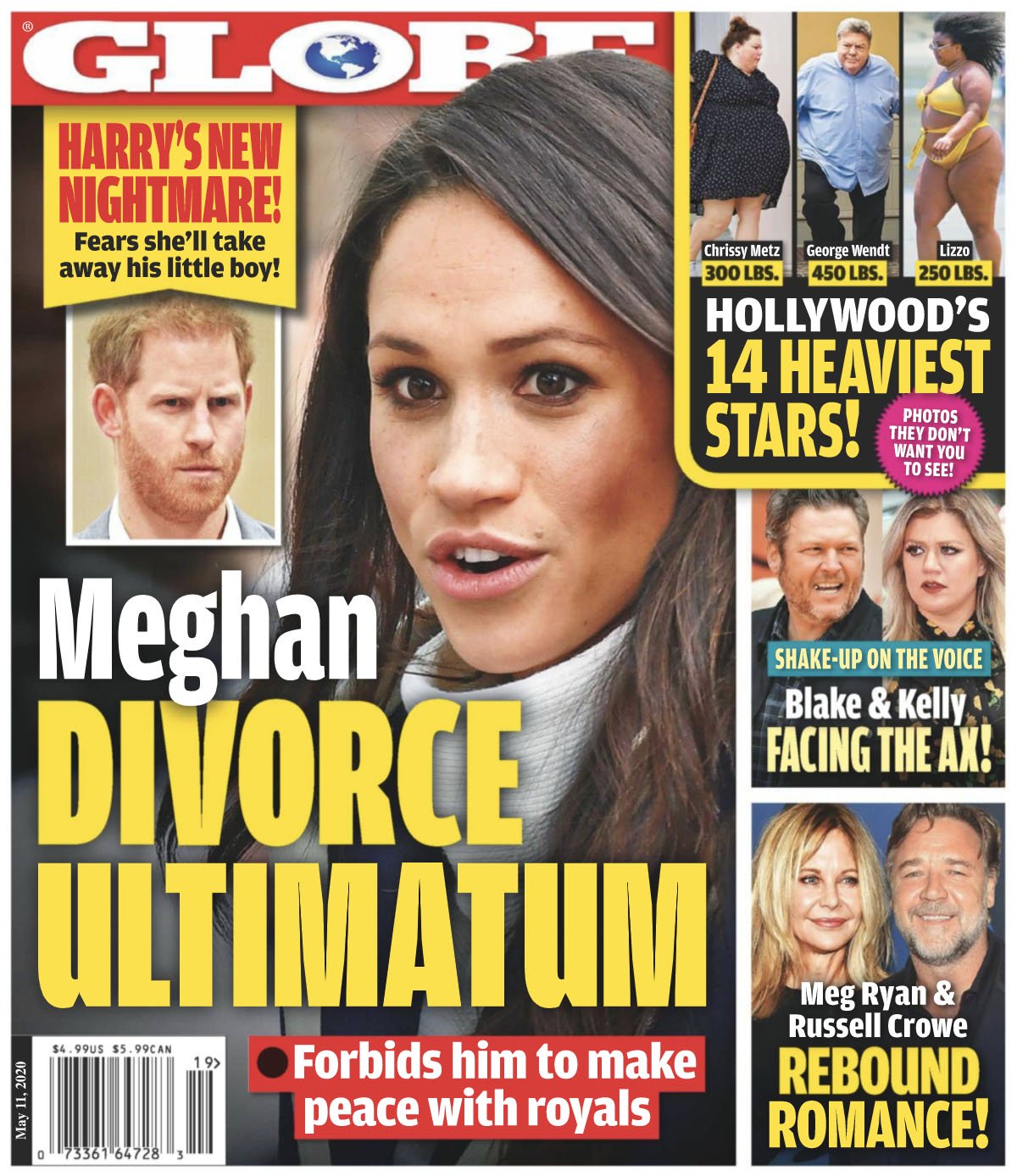 The Globe says that Meghan Markle has threatened Prince Harry with divorce. Markle told Prince Harry, “It’s me or them,” according to a source, “them” being Prince Harry’s family. Prince Harry, a palace source says, regrets the couple’s exile and “blames Meghan for masterminding their disastrous ‘we quit’ move to America and promised he’d make his wife toe the royal line this time. But Meghan wants no part of it!”

This argument, according to the palace source, led Meghan Markle to throw down the proverbial gauntlet. “She knows she’s worn out her welcome…and just wants to get on with her celebrity life!” the source says. “She warned Harry ‘to make the right decision or realize you’ll never see your son again!’”

There is a lot to unpack here, as there usually is with these bogus royal stories. For starters, the couple isn’t in “exile,” as they themselves chose to step away as senior members of the royal family. Prince Harry also has no plans to leave California, as Gossip Cop explained just last week.

Finally, Prince Harry doesn’t “blame” anyone for anything “disastrous.” He has explained that the decision was made, in large part, on account of the traumatic death of his mother, Princess Diana. Like his wife, his mother faced horrible scrutiny from the tabloid media, just like this story.

Frankly, it’s impossible to take the Globe seriously when they “report” on the Duke and Duchess of Sussex. Two weeks ago, the ridiculous outlet purported that Prince Harry was buying a weed farm in California. It was just another story Gossip Cop busted as ridiculous and false. 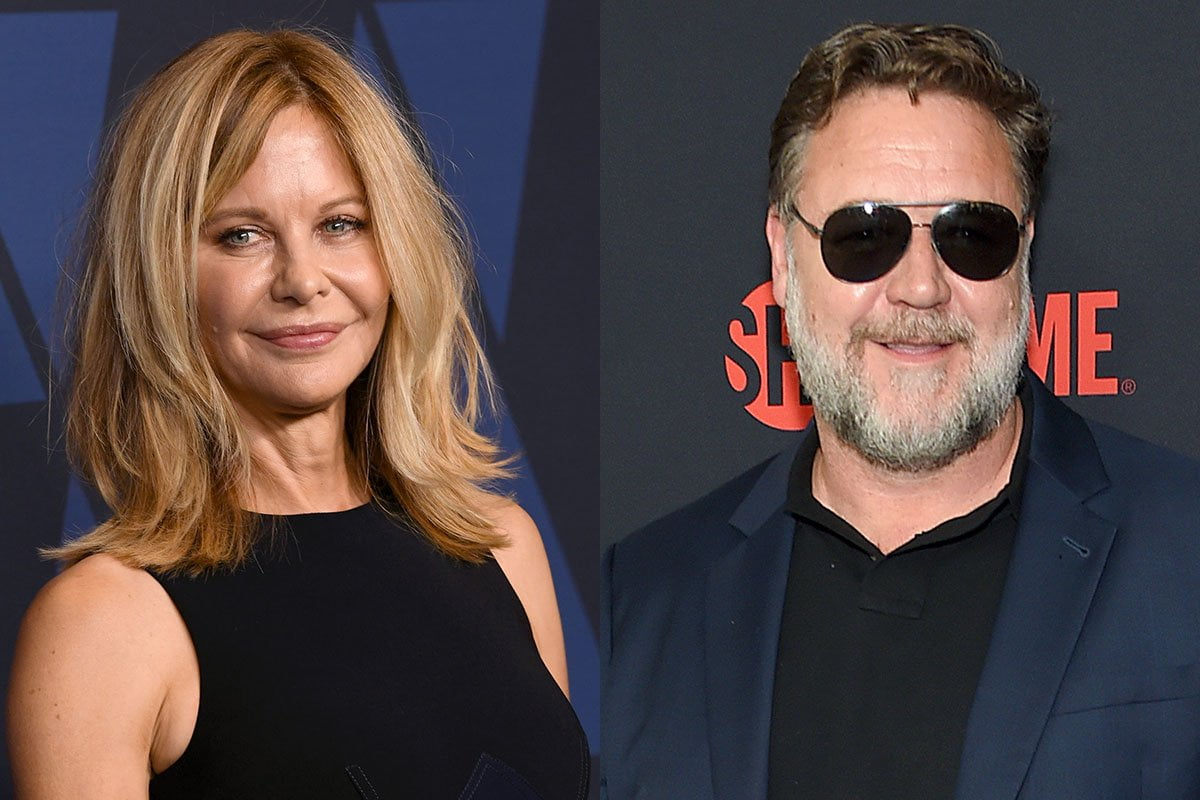 The Globe reports Meg Ryan is “scorned” and running back into the arms of Russell Crowe after her breakup with John Mellencamp. The outlet insists the former pair are picking up right where they left 20 years ago. “Meg and Ryan are hooking up and having a blast,” an insider tells the outlet. The insider continues, “This rebound was just what Meg needed after things went south with John. Thankfully, Russell was there to scoop her back into his arms, and they’re falling for each other all over again.”

The outlet asserts it was a “well-known” Hollywood secret that Crowe and Ryan were “head-over-heels” for each other but the timing of their affair was “terrible.” But the publication then says sources don’t foresee Ryan and Crowe’s “rekindled relationship” going the distance.

This wouldn’t be the first time the Globe was off-base with its allegations about Ryan. Last month, Gossip Cop busted the tabloid for falsely claiming Mellencamp was marrying Sherrill and banning Ryan from the wedding. Gossip Cop dismissed the incorrect stories at the time, just as we are dismissing this latest tall tale. 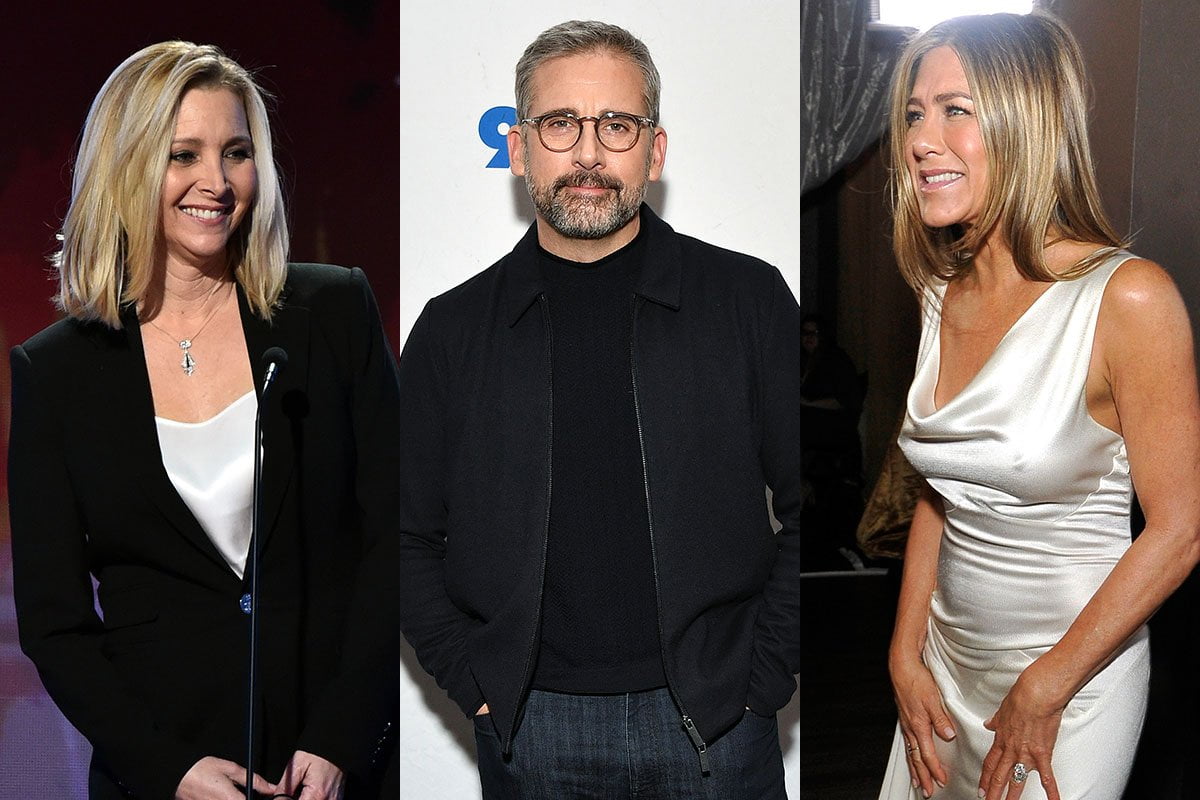 This week’s Globe reports Jennifer Aniston is jealous that Lisa Kudrow is working with Steve Carell. An insider tells the magazine, “Jen has always had a huge crush on Steve, more as a doting father type, and she’s relied on their friendship to get through the best and worst times.” Apparently, following the announcement that Kudrow will be appearing on Carell’s Netflix comedy, Space Force, Aniston was not “jumping for joy.”

“When Jen heard about them collaborating, her heart sank. It’s likely to steal the thunder from the upcoming Friends reunion and season two of The Morning Show,” the source says, adding that while Aniston “adores” Carell and his wife, Nancy, she suspects he won’t be returning to the Apple television show. “Of course, Steve’s predator character was fired at the end of season one of The Morning Show, and Steve hasn’t signed on for season two, and now Jen’s saying now we know why! He’s doing Space Force with Lisa,” the insider asserts.

While it’s true Kudrow is joining Carell’s Netflix show, Aniston is not jealous of the two working together. A rep for Aniston says the story is false.

This wouldn’t be the first the Globe was off-base with its ridiculous claims about Aniston. A few days ago, Gossip Cop exposed the bogus outlet for falsely claiming Aniston was “leaning” on Brad Pitt for financial advice. Before this, the Globe was debunked by us for incorrectly stating Aniston was being dragged into Pitt and Angelina Jolie’s custody battle. Gossip Cop corrected those phony stories at the time and we’re doing the same with this latest tall tale.

The post Debunking the week’s tabloid stories: May 8, 2020 appeared first on Gossip Cop.