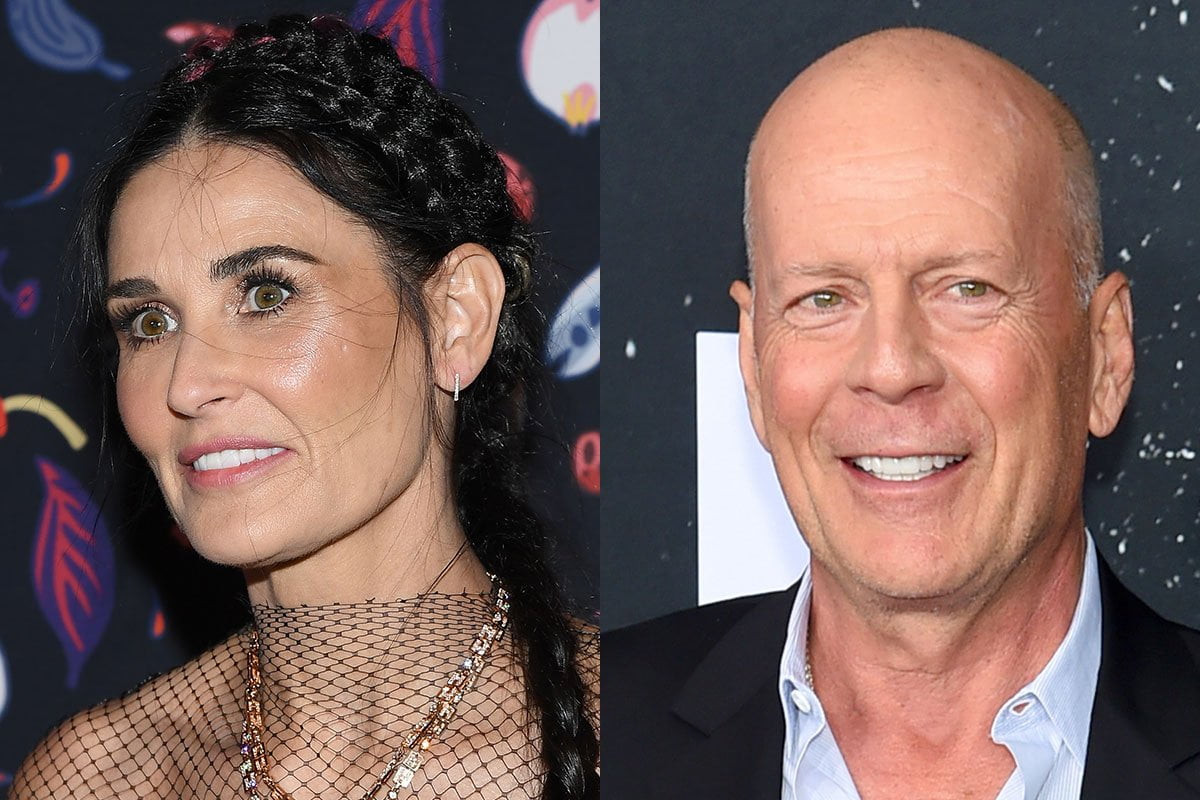 Is Demi Moore in love with her ex-husband Bruce Willis again? One tabloid article published this week says so. Gossip Cop can debunk the phony claim.

Since widespread lockdown began amid the coronavirus pandemic, Willis has been quarantining with Moore and their three daughters in Moore’s Idaho home while Willis’ wife, Emma Heming, has remained in Los Angeles with their two children. Willis and Moore have always remained friendly as exes, but this week’s issue of Woman’s Day is claiming that the time in quarantine has led her to fall in love with Willis again. “They’re truly having such a blast together that Demi has glimpsed what her future could have been if her and Bruce didn’t fall in love at the wrong time,” says a so-called “insider” close to the ex-couple.

Moore, the insider goes on, “feels bad about the situation” because she’s friends with Heming, but “ultimately she feels like he was hers first and she deserves another chance.” Heming, meanwhile, is allegedly “trying to play it cool knowing her husband is having the time of his life cuddled up in his ex’s home, but it can’t be nice to see this all play out on social media.” Moore has been frequently posting photos to her Instagram account of herself, Willis, their daughters, and their daughters’ boyfriends enjoying their time in quarantine together.

Willis’ quarantine living situation did raise some eyebrows at first, but Willis and Moore’s daughter Scout explained the situation. Heming and her daughters had originally intended to join the others in Idaho, but one of the girls had suffered a medical emergency that forced them to stay back in Los Angeles, by which time travel had become out of the question. It’s not about the Die Hard star choosing Moore over Heming, it’s just how things happened. Gossip Cop reached out to Moore’s spokesperson for a comment, who told us on the record that the article’s claim was “totally untrue.”

Heming has frequently commented on Moore’s Instagram posts, writing “love and miss you guys” underneath one photo and “looking good squad” on another. She doesn’t seem too concerned about her husband and his ex-wife spending time together. Willis and Moore were married for 13 years and have now been divorced for 20. They’ve remained friends throughout that time, with Moore attending Willis and Heming’s 10th-anniversary party last year. Why would it take this long for Moore to attempt to restart a relationship with her ex?

Gossip Cop has already had to debunk a couple of bogus tabloid stories about this situation. Two weeks ago we busted a very similar claim from NW about Moore supposedly trying to win back her ex while they were in quarantine. For that story, we also reached out to Moore’s rep who dismissed the rumor as “nonsense.” A week ago, Gossip Cop debunked another similar story from the National Enquirer alleging that Heming was furious that her husband was quarantining with Moore, which obviously wasn’t true for the same reasons we’ve already discussed. Simply put, the situation with Willis and Moore is just nowhere near as dramatic and salacious as all these tabloids want you to believe.