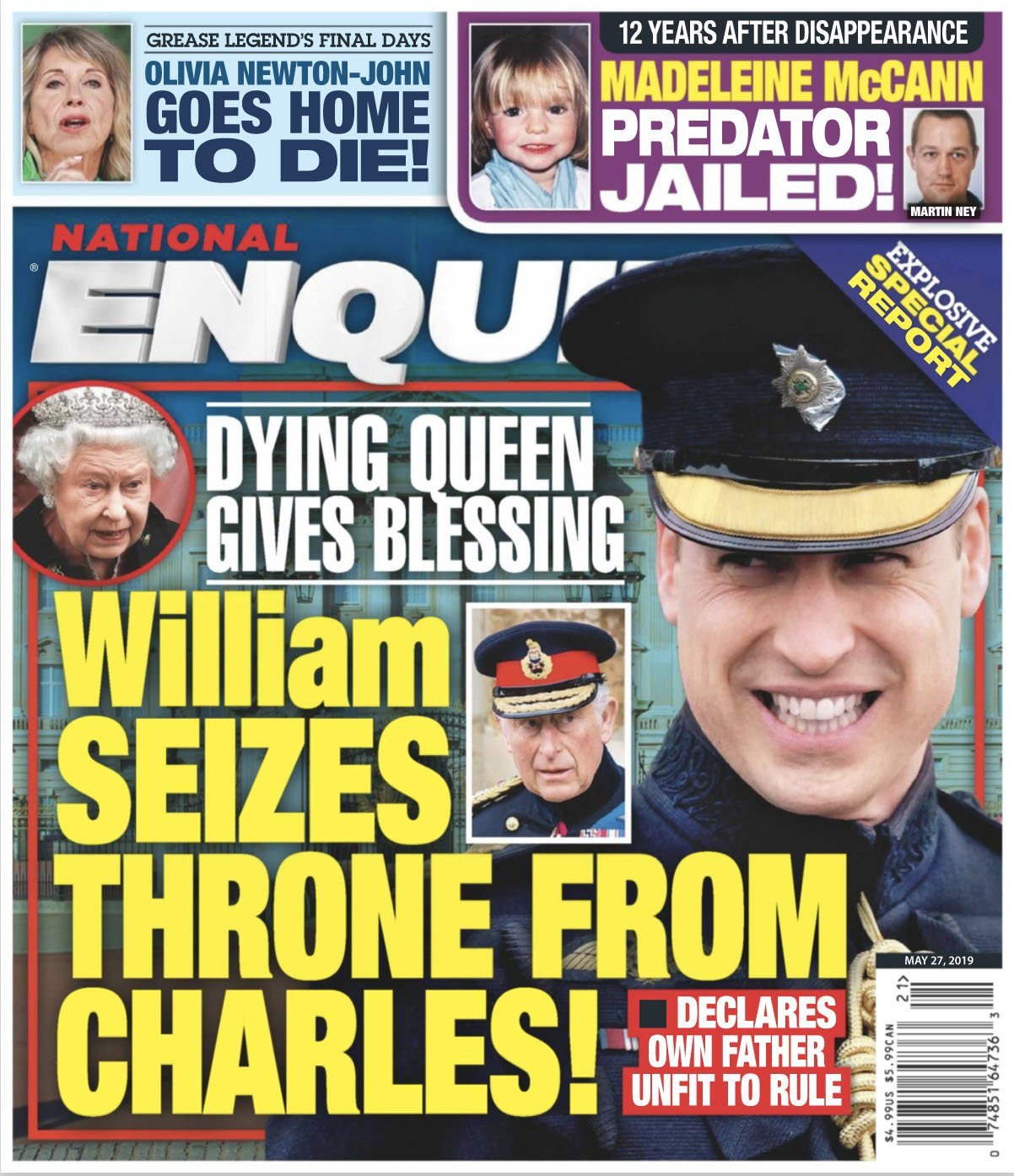 Did Prince William seize the throne from his father Prince Charles on Queen Elizabeth’s wishes? A year ago, Gossip Cop debunked that ridiculous narrative. It remains just as bogus today.

This time last year, the National Enquirer published a story alleging that the Prince William had “snatched the throne” from his father, with the Queen’s blessing, and that Prince Charles, Prince Harry, and Meghan Markle had “officially been declared threats to the Crown,” with moves “being made to strip them of their titles.” “Charles, who is also accused of murdering William’s mother, Diana, is likely to be exiled along with Harry, his wife, and their newborn son, Archie,” a supposed “royal courtier” told the tabloid.

The story was just absurd. The tabloid didn’t even bother to make up a reason for why Queen Elizabeth had supposedly chosen her grandson over Prince Charles. In fact, she had recently given a toast at her eldest son’s 70th birthday in which she referred to him as a “dedicated and respected heir to the throne. Moreover, as Gossip Cop pointed out, the Settlement Act of 1701 requires that Parliament change the rules of succession. It can’t just be done on the whim of the monarch.

The passing twelve months have further proved how silly this story is. The Queen has not disowned the Prince of Wales, Prince William has not made a power grab for the throne, and nobody has been exiled, as if that’s even a thing that still happens. As was widely reported Prince Harry and Markle did give up their roles as senior members of the family and leave the country, but they did so voluntarily and they have retained their title as the Duke and Duchess of Sussex. Prince Charles and his son are not enemies simply because they will, at different points in the future, presumably wear the crown. In fact, as Vanity Fair reported in February of this year, the Prince of Wales and the Duke of Cambridge are “very much a team” in their commitment to leading the monarchy. Like most tabloid stories about the royal family, this one was and continues to be utter nonsense.

It’s clear the Enquirer just loves the idea of Prince William making a power grab against his father, no matter how unlikely that event really is. In January of this year, the unreliable tabloid claimed that the two princes were in a “bitter war for the throne,” an equally phony story which Gossip Cop shot down as false. Again, the rules of succession are a matter of law, not a plotline from Game of Thrones.

Just a month before that, the outlet was insisting that the Queen had named Prince William her heir after supposedly blaming Prince Charles for a then-ongoing scandal involving Prince Andrew. The whole thing was one hundred percent ridiculous. Do we need to point out, again, that the queen doesn’t have this power? Maybe the tabloid should take some classes in U.K. common law.