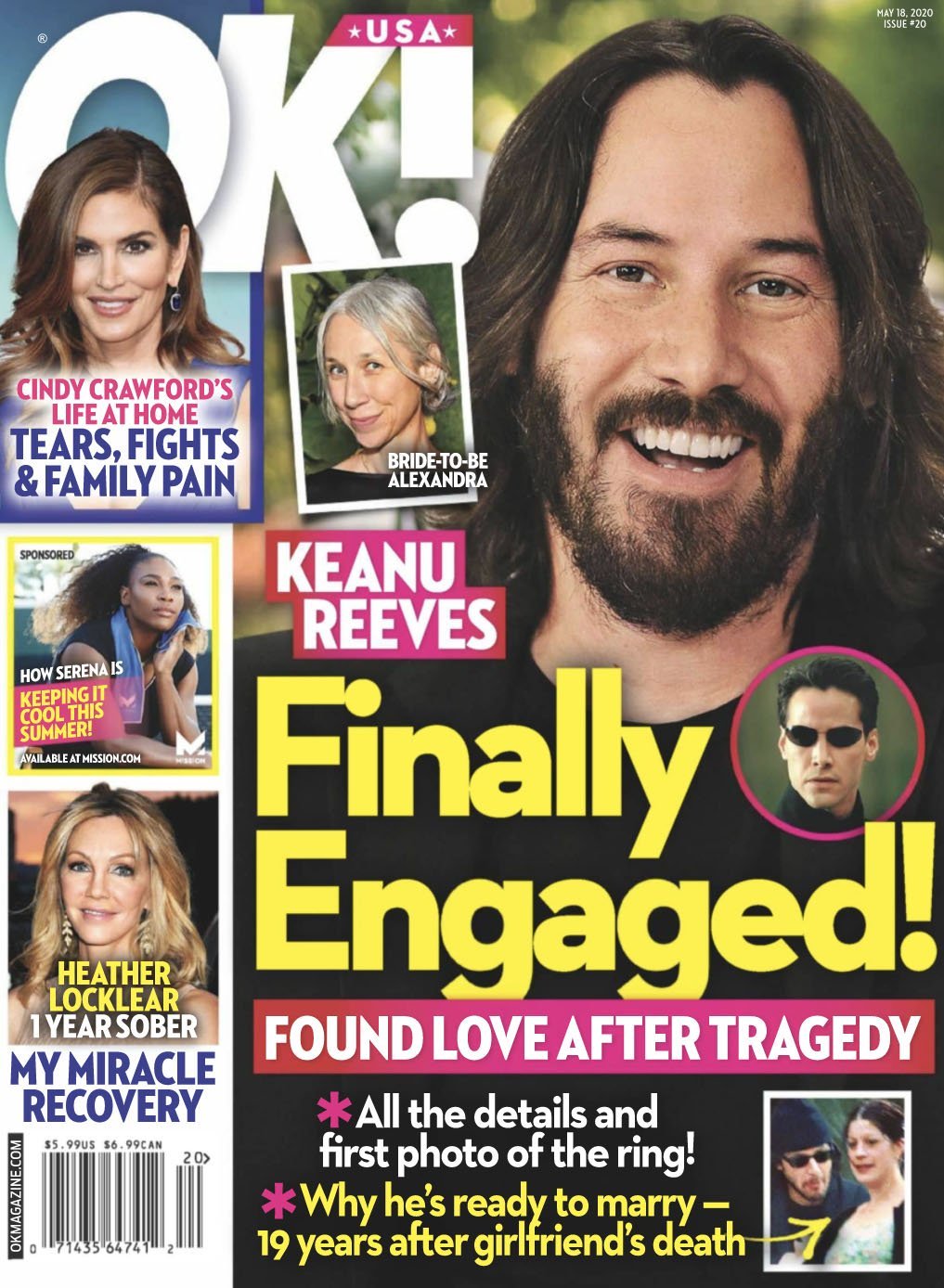 Keanu Reeves‘ relationship with his girlfriend, Alexandra Grant, hit the presses last fall and has sent rumors flying ever since. One recent tabloid report is claiming that Reeves and Grant are planning to get married. But it’s not true, and Gossip Cop can exclusively debunk it.

According to the cover story of this week’s issue of OK!, Reeves is “finally engaged” to Grant. “Nineteen years after losing his soulmate, Keanu Reeves has found love again,” says the article inside. An unnamed “insider” claims that the John Wick actor “slowly started to become this person with a permanent smile on his face” after years of seeming “to carry the weight of the world on his shoulders.” Grant, this shady source says, has “taught him how to love again and healed his broken heart.”

The tabloid then begins a rather tactless account of some of the tragedies Reeves has experienced in his life, including the birth of a stillborn child in 1999 with his then-girlfriend Jennifer Syme and her death in a car accident two years later. After that, the insider says, Reeves “made it clear to everyone that falling in love again was out of the question.” That is, until he met Grant: “he decided it was time to give it a shot, and it didn’t take him long to commit.” Grant and Reeves are now allegedly planning a simple backyard wedding and a honeymoon in Europe.

Before we go any further, Gossip Cop should point out just how sleazy this article is. The bottom of the magazine page is devoted to a list of other stars who have “also found happiness after suffering loss,” because apparently exploiting one person’s tragedy to fill page space is simply not enough. It seems like the tabloid is just using Reeves’ new relationship as an excuse to dredge up the past–which it doesn’t even get the details right on, by the way. Syme and Reeves actually broke up just a few weeks after their child was stillborn, but remained friends up until her death. That detail isn’t all that relevant, except to show how little sensitivity the magazine cares to have on the matter.

The only “evidence” the article bothers to show to back up its engagement claim is a picture of Grant supposedly wearing an engagement ring. In fact, it’s a photo Grant posted on Instagram on and there’s nothing to suggest it’s an engagement ring: sometimes, women just wear rings. Also, she posted the photo on April 16. Are we really supposed to believe the tabloid was sitting on this bombshell for three weeks and said nothing about it? There are other photos since with no ring, as well. In fact she posted a photo today with her left hand explicitly showing no ring.

Furthermore, when Gossip Cop checked in with Reeves’ official spokesperson for comment, and not only were told that not only was the story not true, but OK! had also reached out for a comment. In response to the article, the spokesperson told the tabloid, “Your story is completely false and has no basis in any truth. This is completely fabricated for your own financial gain. If you publish anything else as our comment, then any such statement will be false and we will take appropriate action.” There you have it: Reeves and Grant are not engaged at this time.

This article isn’t the first Reeves wedding rumor Gossip Cop has debunked from OK!, though it is by far the most ghoulish. Last November, shortly after the couple went public with their relationship, the tabloid published a phony report that Keanu Reeves and Alexandra Grant were planning a secret wedding in Malibu. Guess it must have forgotten about that one. The previous January, the magazine wrongly insisted that Reeves was developing a romance with Halle Berry, his John Wick: Chapter 3 co-star. It’s safe to say the magazine has nothing truthful to say about Reeves or his dating life.