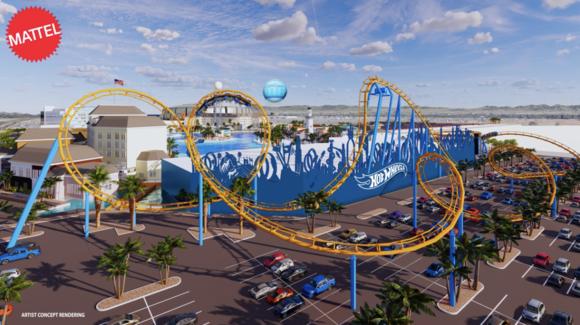 Mattel, Inc. is set to open an adventure park with a Hot Wheels-themed roller coaster, indoor go-karts, and a Thomas & Friends indoor theme park, among other attractions.

Developers made the announcement June 10 during a ceremonial groundbreaking event in Glendale, Arizona.

The Mattel Adventure Park will be part of Glendale’s proposed Crystal Lagoons Island Resort, a 48-acre entertainment district first announced in 2020 and touted to have world-class hotels, restaurants, a concert venue, a beach, a “Fly” theater and a 4-D theater.

The theme park is also said to have the first life-sized and electric battery-powered “Thomas The Tank Engine” passenger train. Other immersive experiences are also planned, developers said.

Additional announcements regarding hotels, restaurants and other partnerships with entertainment brands will be made in the “coming weeks,” said Phelps.

“Mattel shares our vision and sets the platinum standard for the concept of play. We are thrilled to create the country’s first Mattel Adventure Park in Glendale,” said Mark Cornell, president of attractions & entertainment for Crystal Lagoons Island Resort, in a prepared statement.