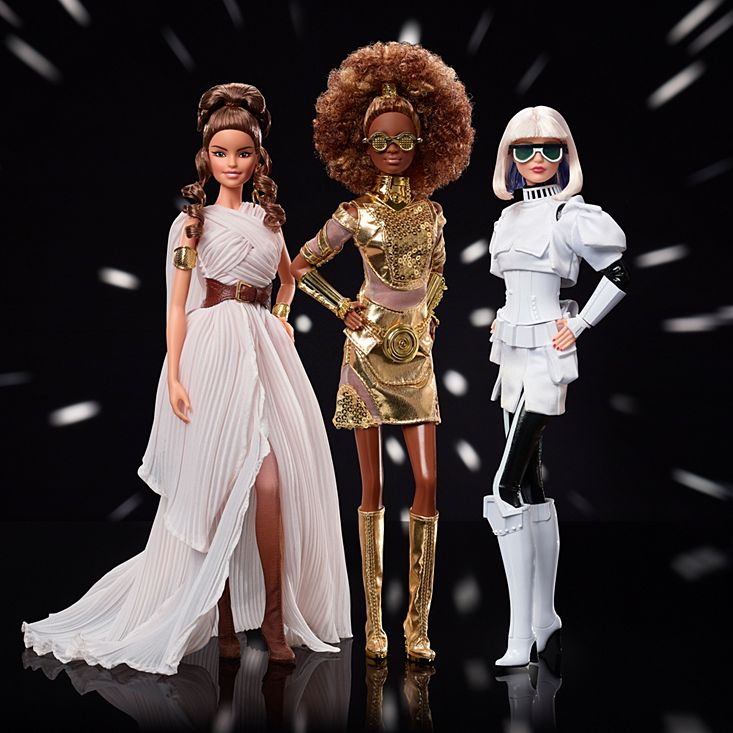 May 4 is an important date for “Star Wars” fans. Otherwise known as “May the Fourth” or “Star Wars Day,” this special and unofficial “holiday” inspired by the movie franchise is a play on one of its most famous quotes: “May the force be with you.”

In celebration this year, Mattel is releasing four new additions to its “Star Wars” Barbie collection.

Beginning Monday, May 4, fans can pre-order C-3PO, Rey and stormtrooper Barbie dolls from Amazon.com and Barbie.com. A Star Wars Chewbacca Barbie Doll is only available on Barbie.com. They ship between May 12 and June 15, according to the retail sites.

These special collector dolls are inspired by the films’ original concept art. The new additions to the Star Wars x Barbie Collection aren’t meant to be completely faithful recreations of the characters’ on-screen appearances. Instead, the iconic Star Wars looks get a high-fashion makeover.

Just check out the original design for the Chewbacca doll, which turns the character’s furry appearance into an haute couture-worthy faux-fur ensemble.

Back in 2019, Mattel released the first series of dolls as part of the Star Wars x Barbie Collection, including Darth Vader, Princess Leia and R2-D2-themed ones. You can now also buy all the dolls in the collection together (minus Chewbacca) for $480.

“The new series of dolls needed to maintain the same feeling as the first series, but also offer enough new details and surprises to keep fans excited about the new additions,” Robert Best, senior director of Barbie design, said in a statement. “For this second series, I really wanted to push the fashion elements even further. There are amazing shoe designs, great accessories and jewelry that would be at home in a runway show or a high-fashion editorial photo shoot.”

If you’re a fan, you’re going to want them all! Shop the whole collection here.