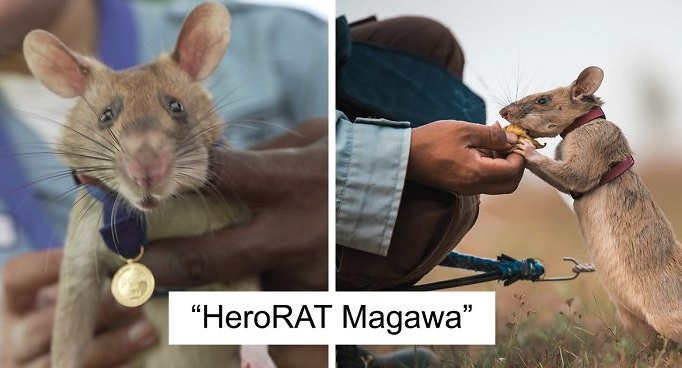 Dogs, pigeons, horses and a cat have all received Britain’s top civilian award for animal bravery. But never before a rat — until now.

Magawa, an African giant pouched rat trained to sniff out land mines, is a trailblazing awardee of the prestigious People’s Dispensary for Sick Animals (PDSA) Gold Medal for heroic animals in civilian life.

Over his five years of work in Cambodia, the 2.6-pound rat has cleared 1.5 million square feet of land. In the process, he found 39 land mines and 28 unexploded ordnance items.

Magawa, who is nearing retirement, is a HeroRAT trained by the Tanzanian-based organization APOPO (in Dutch, this stands for Anti-Persoonsmijnen Ontmijnende Product Ontwikkeling; in English, it’s Anti-Personnel Landmines Detection Product Development). The organization also trains rats to detect tuberculosis and is adding HeroDOGs to search areas with heavier vegetation.

The PDSA Gold Medal award is considered the animal equivalent of the George Cross, the second-highest British honor given to British military members and civilians for valor in dangerous conditions.

Magawa and his fellow HeroRATS have been trained from an early age to scent out the explosive chemicals found in land mines. This allows them to be extremely accurate in their work. Magawa can also move much more quickly and safely than a human can. Plus, his small bodyweight of 2.6 pounds won’t trigger any land mine he walks across.

For his achievements, Magawa got a tiny gold medal that attaches to his work harness, lots of pets and promises of extra treats from PDSA supporters who commented on his award video.

“Magawa definitely deserves it, and I really hope this brings APOPO more into the public eye,” said YouTube user Tiger Walton. “Gonna go buy him a treat for being such a good boy.”

Magawa’s stomping grounds (although he’s really good at treading lightly there!) in Cambodia have the highest ratio of mine amputees anywhere in the world. This is due to the large number of land mines pockmarking the agricultural country long after they were left there during decades of war.

Such weapons were left by the U.S. and Vietnam during the Vietnam War, Chinese and eastern block countries from the Khmer Rouge era, and as a result of civil war in the ’80s. An estimated 3-6 million unfound items of explosive ordnance remain in Cambodia, and 64,000 people have been killed by land mines since 1979.

Over 110 million land mines remain in the ground around the world, according to Unicef. More continue to be placed in places like Nigeria by groups like Boko Haram. An average of about 8,000 people are still killed by land mines each year. The Landmine Monitor reports that 7,239 were killed in 2017, and 2,452 of those casualties were children.

We need more heroes like Magawa to help reduce those numbers! If you’d like to adopt him or one of his fellow APOPO rats, visit this page.