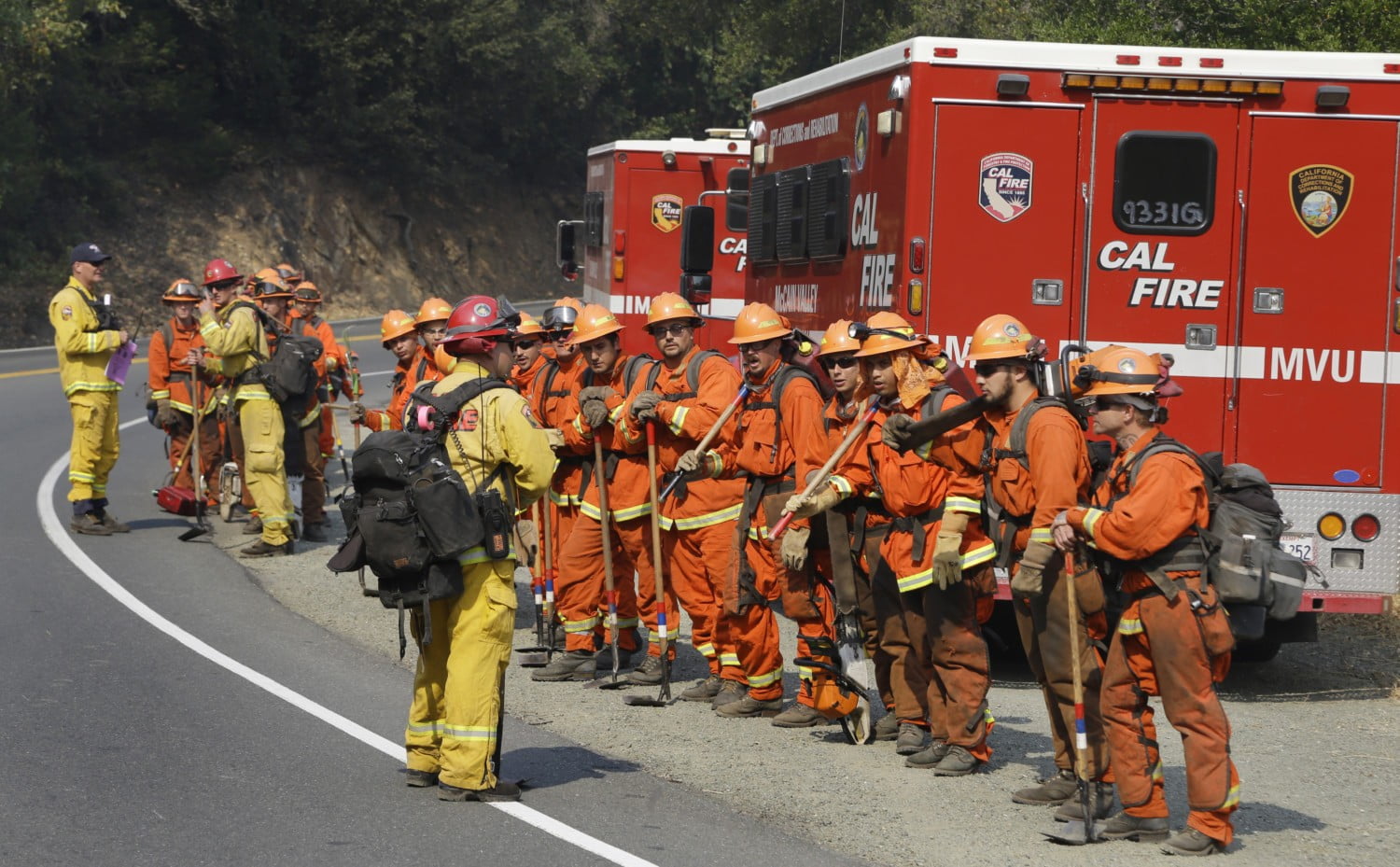 FILE - In this Wednesday, Oct. 11, 2017, file photo, prisoners from the McCain inmate crew from San Diego, prepare to clear brush from a road on in Calistoga, Calif. California is scrambling to find sufficient wildland firefighters amid a coronavirus outbreak that has depleted the ranks of inmates who usually handle some of the toughest duties. (AP Photo/Ben Margot, File)
Share
Tweet
Share
Share
Email
Comments

On Friday, Sept. 11, California Governor Gavin Newsom signed a bill that allows prisoners who fight fires while in jail to have their records expunged to transition into roles as firefighters and emergency workers upon release.

The new law comes on the heels of massive ongoing wildfires across the state as it continues to battle the coronavirus pandemic. AB2147, sponsored by Democratic Assemblywoman Eloise Reyes, reveals California’s long-term practice of using trained inmates to help fight fires, supporting the professionally trained fire department. In fact, last year, about 3,100 inmates helped to fight fires. Those inmates reportedly receive $1 an hour for working during an active fire.

“I think that after seeing all these young men and women stand side by side with our other fire crews and knowing that they had no hope of entering that profession, I knew that it was wrong and that we needed to do something about it,” Reyes told NBC.

The law will allow prisoners who served in a state firefighting camp or county fire hand crew to have their records expunged upon release so they can qualify to receive EMT certification, a critical factor in the process of becoming a municipal firefighter. The accelerated process would allow them to apply for new careers without having to reveal their criminal records, which is often a part of a job application process. AB2147 won’t apply to those who have criminal records for violent offenses such as murder, kidnapping, rape, arson, or any felony punishable by death or life imprisonment.

In a statement that accompanied the bill, Newsom wrote, “Inmates who have stood on the frontlines, battling historic fires should not be denied the right to later become a professional firefighter.

Inmates who have stood on the frontlines, battling historic fires should not be denied the right to later become a professional firefighter.

However, the bill has received push back from members of law enforcement and prosecutors who believe that those incarcerated have proven that they are at a higher risk of posing a threat to the public. That argument, according to the National Council on Crime and Delinquency (NCCD), is used to negate the value of accelerated release programs. In a literature review of more than 12 peer-reviewed articles, the NCCD found that there was no significant difference in rates of recidivism among early release and full-term prisoners. In some instances, accelerated release prisons had lower rates of recidivism than those who served full sentences.

“Rehabilitation without strategies to ensure the formerly incarcerated have a career is a pathway to recidivism,” Reyes said in a statement. “We must get serious about providing pathways for those that show the determination to turn their lives around.”