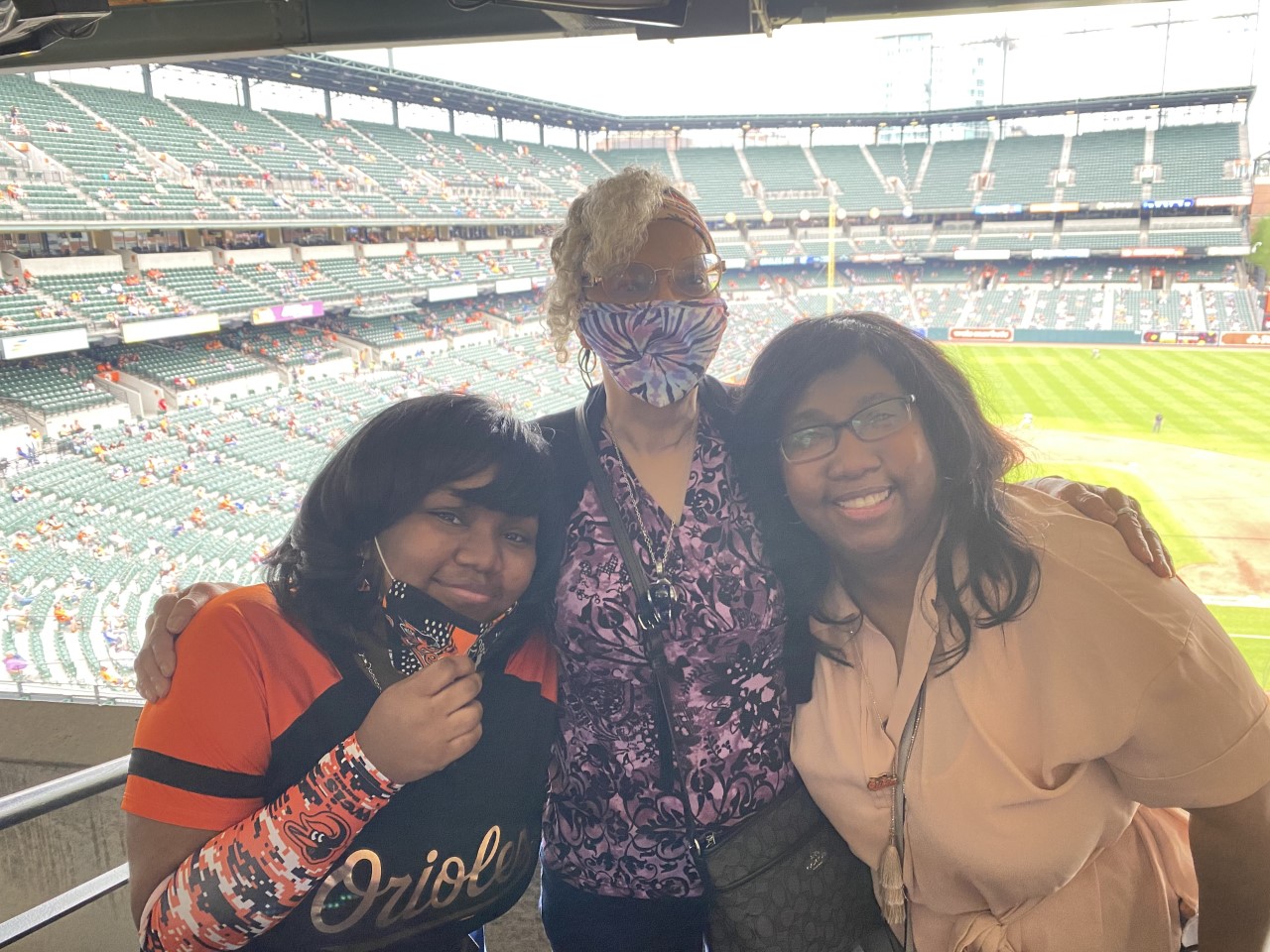 A few years back, Charlynne Lowe and her mother, Charlene, were at home looking for a movie to watch when they caught the Scripps National Spelling Bee on TV. Their interest was piqued as they watched the spirited competition play out on stage.

“I never knew that was a thing: ‘You can spell and compete?’” Charlynne recalls thinking.

The mother-daughter duo became, well, quite spellbound. Charlene checked in with her daughter’s school — King’s Christian Academy in Callaway, Maryland — to see if there was a spelling bee program available for students. When she discovered there wasn’t one in place anymore, Charlene started one in 2019 and did so with the same zeal as launching a competitive sports team.

Working with her daughter’s school, Charlene made sure the school enrolled with the Scripps National Spelling Bee to receive spelling bee materials like official word lists (if you’re interested in enrolling a school in the Bee, learn more about the process on the Bee website). She asked teachers to help spread the word and there were announcements made at school about the new spelling bee club. She also worked with the school to reserve a room where one-hour practices could be held once a week.

She recommends starting spellers out 10 words at a time so they’re not overwhelmed with a daunting list of big words. Charlene even scouted out spelling bees at other schools in the region to glean best practices for starting and running an A-team bee team. Today, the KCA Spellers have team sweatshirts and a chant.

Making It To The Bee

Now a ninth-grader, Charlynne is one of the KCA Spellers’ queen bees and a competitor in the 2021 Scripps National Spelling Bee. Charlynne is one of 209 spellers from across the United States and around the globe who made it to the Bee’s preliminaries.

The national competition kicked off on June 12 with the preliminaries, 74 spellers moved onto the quarterfinals on June 15 and 30 will compete in the semifinals on June 27. This year, due to the coronavirus, the first three rounds of competition are being held virtually. The top 10 to 12 spellers will attend the in-person finals on July 8 at ESPN Wide World of Sports Complex at Walt Disney World Resort. You can watch the semifinals and finals on ESPN2.

The National Spelling Bee began in 1925 when nine newspapers joined together to host a spelling bee. Nearly a century later, their literacy effort would reach 11 million students each year. For over 50 years, the Bee and Merriam-Webster have worked together to bring interesting, meaningful words to the best spellers across the country.

With the addition of word meaning rounds — a new opportunity for spellers to show off their word mastery from the microphone — and the potential for a final spell-off, it will be a fun Bee to watch.

Here’s a photo of the stage set up for the 2019 Bee. The 2021 Bee will take place in a different location, but the stage will have some similar elements to this one: 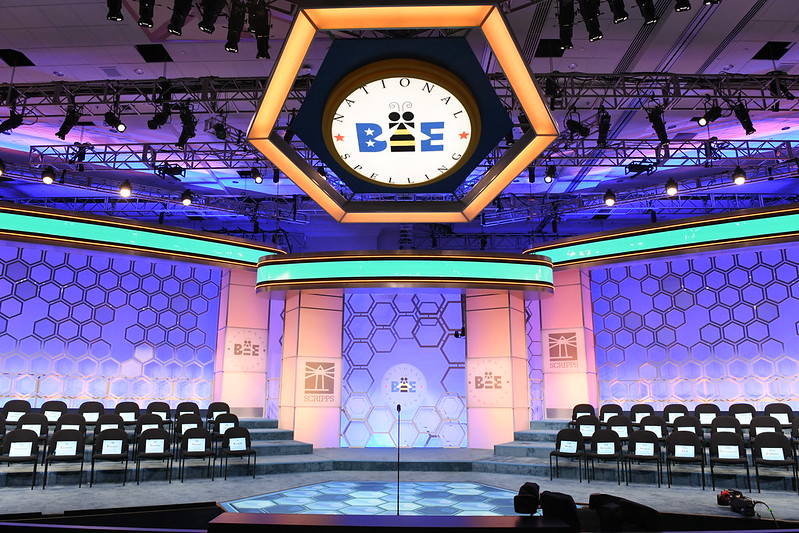 Getting Prepared For National Competition

With the first rounds being held virtually, Charlene decorated her dining room for the spelling bee. “It’s bumblebee everything!” she says.

Ahead of the spelling competition, Charlynne told Simplemost she had been practicing on an app, 30 minutes here and there, whenever she had downtime.

A winning word that qualified her for the bee was a surprisingly simple one: “oasis.” But, the beauty of the bee is that it can be quite unpredictable, and tough words can pop up in earlier rounds. For Charlynne, one of those words, for example, was “trichotillomania.” (Definition, please? It’s a hair-pulling disorder.)

So, what’s the trick to becoming a competitive speller? Simply trying to memorize how to spell a dictionary full of words won’t get you very far.

“To be a good speller, you have to know the roots and the origins of words,” Charlynne says. For instance, knowing if a word has, say, Greek origins will give you a hint about how it’s spelled.

As far as composure goes, she reminds herself to take deep breaths during the competitions and focus on the words (not the crowds!).

While Charlynne advanced to the second round during the June 12 preliminaries, she did not ultimately make it to the quarterfinals.

“The first round was exciting and scary,” she says. “I am so glad I had the opportunity to compete in the preliminaries. I wish all the other spellers good luck.”

Beyond spelling, Charlynne has a broader interest in language, different cultures and the arts. She’s a poet, and she won her school poetry contest with a poem entitled “40,” which was a narrative from the point of view of a 40-year-old. She’s teaching herself to write Korean because her school hosts Korean students and she became an ambassador for the program. She paired up with a Korean student with whom she became fast friends and still keeps in touch.

In addition to spelling, Charlynne loves playing instruments. Right now, she can play eight, including the violin, guitar, ukulele, drums and piano. Her goal is to someday learn how to play 21 instruments.

But her fascination with words is long-standing.

Charlene says she started playing Scrabble games with her daughter when she was just 3 years old. (They have Scrabble Jr. games if you want to get your kids started early, Charlene says). She also noticed her daughter was a voracious reader.

“She loves words and the origins of words and how they’re put together,” Charlene says.

A fun fact: Charlynne’s own name has a sweet spelling-related origin: It’s the combination of her mom’s name (Charlene) and the name of her grandmother (Gwendolyne). Here is a photo of the three generations of Lowe women at a baseball game (pictured from left to right: Charylnne, Gwendolyne and Charlene).

While Charlene’s time at the Bee may have come to a close, we are excited to see what she and the KCA spellers do next.

Learn five things you may not know about the Bee in the video from our friends at The List below: