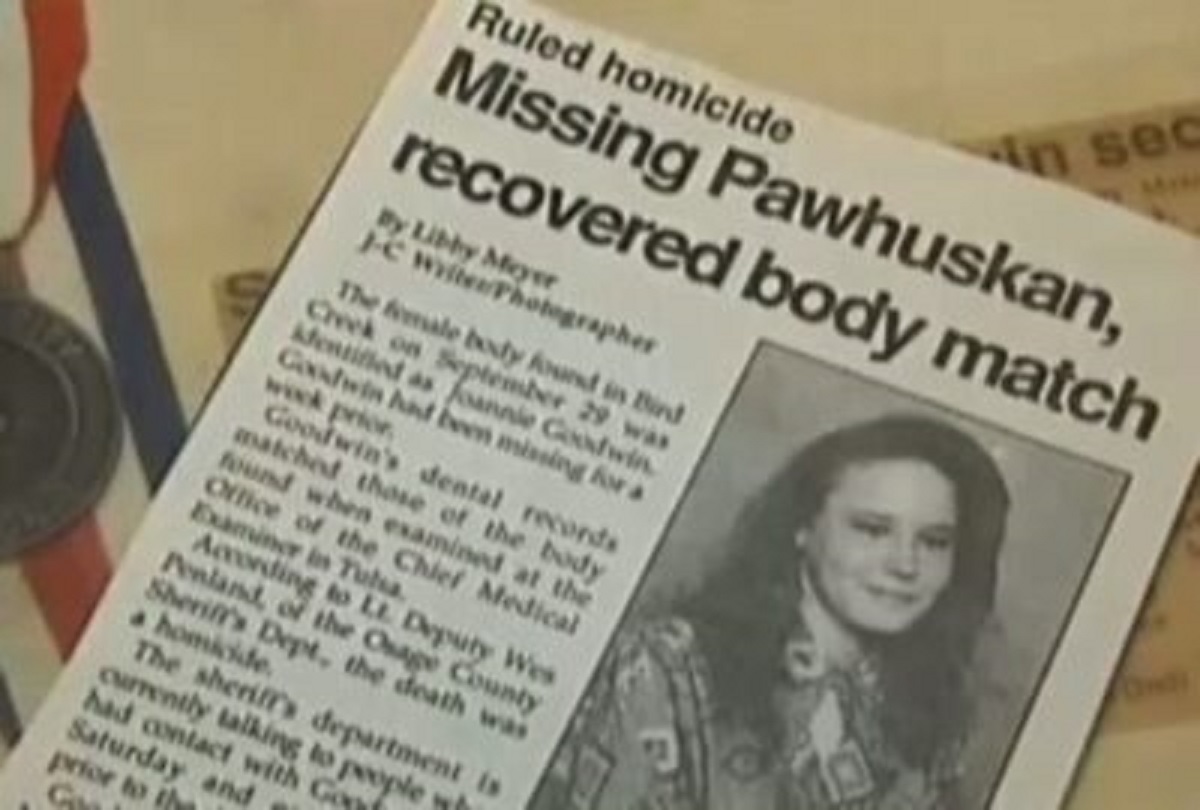 Jealousy can be one of the most destructive and dangerous emotions contained within the human gamut. As a close relative of envy, jealousy sometimes causes people to do things that they wouldn’t normally do.

It may have been more than 20 years ago, but no one had forgotten the tragedy that had befallen the town in Oklahoma. Fast forward 22 years and the truth was about to be revealed…

It was the September of 1996 when a small town in Oklahoma would be shocked to its core after the brutal murder of a 19-year-old girl. To make thing worse, Joannie Goodwin was the mother of a 7-month-old baby when she was slain. The details of the shocking case were almost unbelievable at first …

Bird Creek, located near the Pawhuska, Oklahoma, was where the killer left the body. Having been bound with electrical wire and shot, Goodwin’s remains were found in the creek by fisherman days after her disappearance.

When the two fisherman realized what they’d seen, they called the police. Goodwin’s remains had decomposed badly, leaving a rather gruesome seen for the fisherman and the police who arrived shortly thereafter.

Leading up to the killing, it was rumored that Goodwin had been having an affair with another woman’s boyfriend. That woman’s name was Cherri Miller-Terry. Even though the rumors were never proven to be true, it may have been too little too late …

“There’s nobody that has the whole story,” Osage County Sheriff’s Office investigator Dale Hunter told reporters. “Just people with pieces here and there that shows the whole story.” Despite no single person knowing the entire truth, enough evidence was collected that Miller-Terry, two decades after Goodwin’s body was found, was arrested and charged for the crime.

You may be familiar with ‘Cold Justice,’ an unscripted true crime series originally broadcast on TNT. The series follows former prosecutor Kelly Siegler and a team of investigators who re-open unsolved murder cases with the consent and assistance of local law enforcement. The show has helped generate 35 arrests and 18 convictions.

Investigator Hunter and others were able to track down witnesses across four states thanks to Cold Justice, which would prove to be more than enough to reopen the decades-old case. And the motivation for the potential murder was shocking …

Goodwin was apparently friends with a man who was considered Miller-Terry’s boyfriend, though not in a romantic relationship like rumors previously suggest. When Goodwin claimed that she was pregnant with his baby, however, Miller-Terry saw red and plotted her murder in cold blood, according to the police report.

According to reports, Miller-Terry was obsessed with Goodwin, even though the man, who has not been named for legal reasons, was sleeping with many different women at the time. As a witness told investigator Hunter, “He could have slept with anybody in the world — just not [Goodwin].”

Other witnesses came forward to confirm that, at the time, Miller-Terry had “routinely threatened to ‘whoop the ass’ out of any girl talking to” her boyfriend. The affidavit noted that Miller-Terry told witnesses at the time that she would kill Goodwin, “if she didn’t leave [her boyfriend] alone.”

Some other witnesses also came forward and indicated that Miller-Terry “hated anyone” who was in contact with her boyfriend, especially attractive women. But then something strange happened when Miller-Terry told a friend that she wanted to “bury the hatchet” with Goodwin …

Just one week before Goodwin was killed, “Inexplicably … they’re suddenly friends and moving in together,” Hunter said. Miller-Terry told police different versions as to how and why she had made up with Goodwin. But there were a “lot of inconsistencies about that, not minutiae — major details,” Hunter said…

On the night that Goodwin disappeared, she had been hanging out in town in Pawhuska with some buddies. At a certain point, she was left alone in a truck which had a dead battery as her buddies went to locate some jumper cables. But by the time they returned to the vehicle, Goodwin was gone.

While initial reports suggested that the two men who went for jumper cables were the last to see Goodwin alive, the latest investigation has revealed that she was in fact last seen alive at around 3 a.m, with Miller-Terry.

In order to throw the scent off her own back, Miller-Terry went ahead that morning and reported her friend missing to the police. She also organized and led search parties to find her, thinking that everyone would assume she was innocent, and for more than twenty years, she was right.

Thinking she was smart and trying to keep one step ahead of law enforcement, Miller-Terry told investigators at the time that Goodwin was known to disappear randomly and without warning, sometimes for days on end.

At around the same time that witnesses saw Goodwin with Miller-Terry at a convenience store in Pawhuska, during the early hours of the morning, other witnesses heard two distinctive gunshots. That fact was made even more interesting when Miller-Terry allegedly told friends at the time that Goodwin “had a shotgun waiting for her,” according to an affidavit.

At the time, investigators working the case were unable to confirm exactly where Goodwin had been shot. One witness mentioned wet shag carpet at Miller-Terry’s home, while another said they saw the suspect and another person cleaning the interior of their car just hours after the murder…

With all the new information that came to light, mainly thanks to the Cold Justice crew, Miller-Terry was brought to justice and is currently facing extradition to Osage County where she will face trial. By most accounts, it’s an open and shut case.

For her crime from more than twenty years ago, Miller-Terry is set to face the full force of the law against her. She will spend her time in jail until her extradition date to Osage County comes around.