Anyone who makes it to the NFL can expect a generous paycheck, but the ones playing quarterback will typically find their bank accounts getting the biggest boost. A great quarterback often makes the difference between a franchise ruling the league and one that is mired in mediocrity, which is why teams are willing to shower their signal caller with tens of millions of dollars per year, despite the constant risk of injury in professional football.

We’ve taken a look at the riches piled up by NFL quarterbacks over the years and ranked the top career earners as they stand following the 2020-21 season. While active passers dominate the list, there are several retired stars who still rank among the richest ever.

While Drew Bledsoe hasn’t played in an NFL game since 2006, he pulled in enough coin to still rank among the game’s richest today. Tenures with the Patriots, Bills and Cowboys contributed to his healthy retirement fund, with the majority of it coming from New England. In nine seasons with the team — which Bledsoe led under center right before his backup, Tom Brady, took over — he earned more than $52.6 million, according to the financial stat-keeping wizards at Spotrac.

Last season, Jared Goff earned $31 million from the Rams, which is more than Tom Brady has ever earned in a single season. Let that sink in for a second. The current Lions starter, who went to two Pro Bowls in five seasons in Los Angeles, has earned a reputation for mediocre play ever since he led the Rams to an NFC Championship in 2019, despite putting up consistent numbers during his brief career so far. This season, Goff stands to earn another $25.6 million, making him one of the few athletes to cross the $100 million threshold in NFL history so far.

The vast majority of Andy Dalton’s career bankroll came from his tenure in Cincinnati, which saw him clear more than $83.5 million in nine seasons that were mostly underwhelming for fans of that tortured franchise. It looked like the “Red Rifle” had fired his last meaningful shot downfield when the Bengals cut him loose and he landed as a backup in Dallas in 2020, but he impressed the brass in Chicago enough during that season for the Bears to sign him as their likely starter in 2021, setting him up to climb even higher on this list.

Matt Hasselbeck managed to make a ton of money and have a great career as an NFL starter, despite being drafted with low expectations in the sixth round. It wasn’t until his fifth season in the league that the three-time Pro Bowler surpassed just $1 million in career earnings, but his paychecks took off after that. In 18 seasons, Hasselbeck earned just over $88 million, nearly $63 million of which came from the Seahawks, whom he led to the Super Bowl in 2006.

Of all the guys who have earned enough money to crack this list, Jimmy Garoppolo has to be the biggest head-scratcher. This is a quarterback who has started six games or fewer in six of his seven seasons so far, giving him the equivalent of two full seasons as a starter in terms of games to this point. But when “Jimmy G” starts, he rarely loses, which was on full display during the 2019-20 slate, when he led the 49ers to a 13-3 record and an NFC championship, making up for the $41.9 million the team paid him the previous season in the first year of his monster deal with them.

Although it’s been a few seasons since Derek Carr was invited to the Pro Bowl, the longtime Raiders starter has been playing arguably the best football of his career in the past couple years. He’s had three consecutive 4,000-yard passing seasons and two straight seasons with a passer rating above 100 and has been paid handsomely for his efforts. Since 2017 alone, Carr has taken in more than $86 million in salary and bonuses from the Silver and Black.

If you are stunned to see Matt Schaub among the 25 highest paid quarterbacks in NFL history, you are not alone. A single playoff victory, two Pro Bowl appearances and fewer than 100 games as a starter were all it took this retired veteran to collect a lifetime of cash in the NFL. Best known for his days in Houston, Schaub was under center when the Texans won their first playoff game as a franchise in 2012. He made nearly $22 million that year alone, making it easily the most lucrative of the 17 seasons he spent in the league before retiring in 2021.

Donovan McNabb retired after the 2011 season and had all the stats of a Hall of Famer. The Eagles star made six Pro Bowls while with Philadelphia and was one of the league’s marquee players in the early 2000s. Over 13 seasons, McNabb earned nearly $100 million, $76 million of which came from the Eagles. It might surprise you to know that his most lucrative season came in 2010-11, when the Washington Football Team gave a 34-year-old McNabb more than $18.5 million only to see him post a passer rating of 77.1, the lowest for any of his years as a full-time starter. 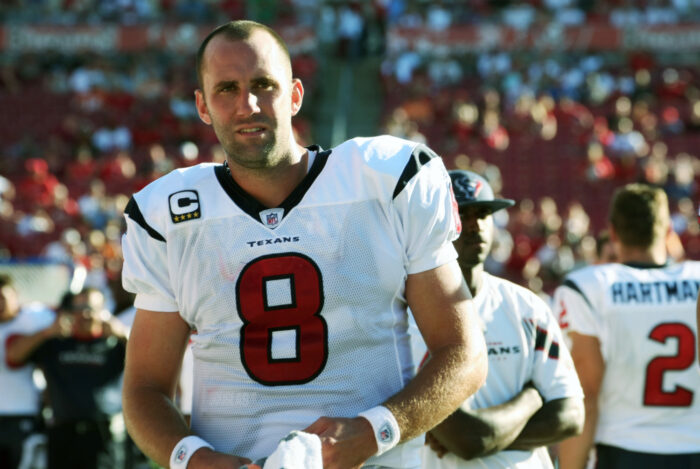 A former No. 1 overall draft pick, Andrew Luck raked in an enormous amount of money in what was ultimately a very short career as an NFL quarterback. Before he shockingly retired after the 2018-19 season, the Colts star was among the most consistent — and highest-paid — passers in the game. The four-time Pro Bowler’s richest year came in 2016, when he commanded $30 million from Indianapolis, but his most enjoyable had to be in 2019, when he took home $12 million in previously agreed-upon bonus cash despite being retired all season!

For eight seasons with Miami, Ryan Tannehill rarely lived up to his sizable paychecks, but he’s turned that around in the past couple years with Tennessee. In those mediocre-at-best years with the Dolphins, the former top-1o selection earned more than $72.5 million while never starting in a playoff game. Since he joined the Titans in 2019, he’s taken them to the postseason twice, been named to his first All-Star Game and cashed in roughly $43 million, which fans would say is well worth his services. He stands to make at least another $24.5 million this season, which would vault him into the top 15 all-time.