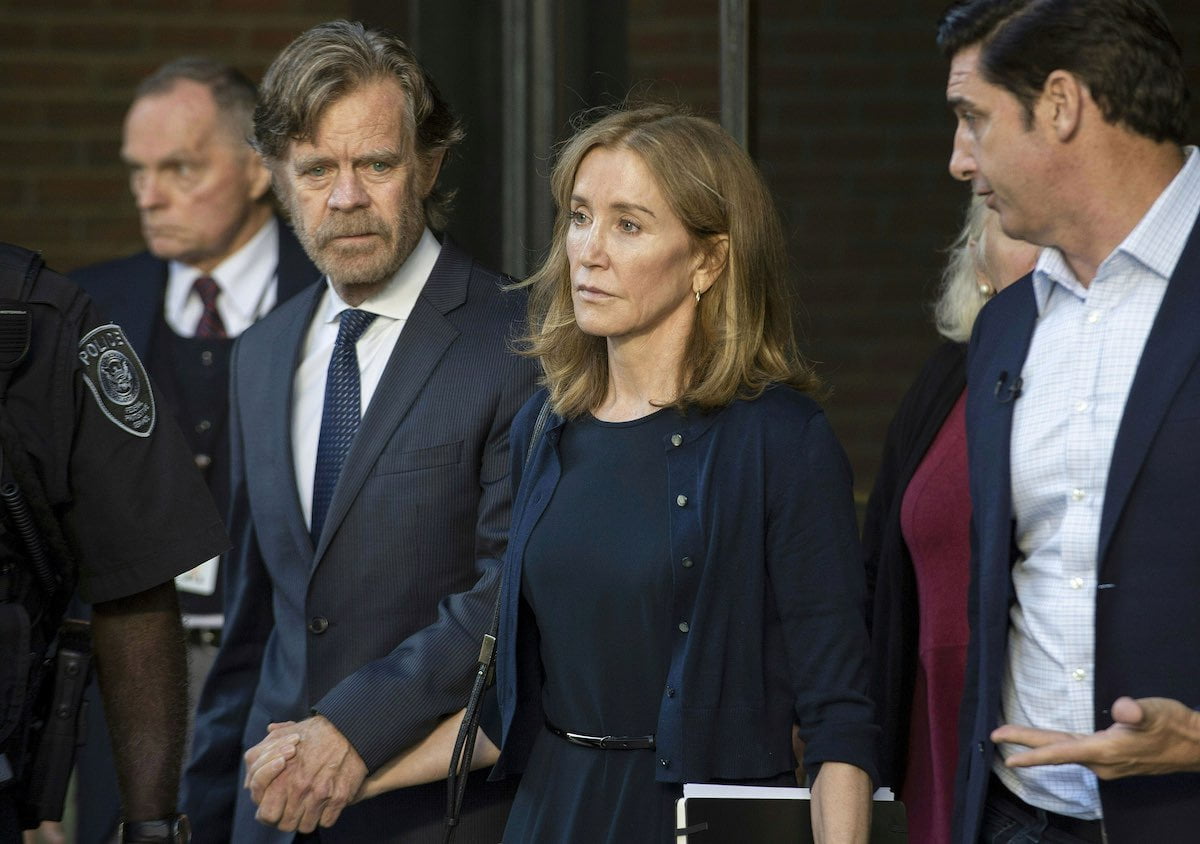 After Felicity Huffman’s arrest in March 2019, fans and outlets alike speculated about how the actress would fare in court. Once she pled guilty and was sentenced, however, those whispers soon turned to rumors about how she would handle her 14-day prison sentence. Of course, plenty of that talk was based around the idea of a longtime member of the Hollywood elite being thrown into the slammer rather than the reality of Huffman’s situation, so there was plenty of misinformation. The primary sources for all of the off-base gossip were unsurprisingly the tabloids. Gossip Cop investigated all of those claims, and now that the actress has completed her sentence, we know more about how she actually fared in prison.

Just before Huffman began her sentence, Woman’s Day reported that William H. Macy, her husband, was going to divorce her once she was released. “[Macy] has been doing his absolute best for the sake of their two daughters to be Felicity’s rock,” an anonymous source told the magazine. “But he had no idea she’d done what she did and he’s still fuming about it. He’s a good man and he loves her but he’s not sure he can ever trust her again.”

It was an easy rumor to believe if you weren’t familiar with the couple. Plus, it’s an eye-catching headline full of drama in an already intense situation. That being said, it completely ignored the reality of their relationship. Macy praised his wife’s efforts with family therapy and had nothing but praise for her in court documents. No divorce papers have surfaced in the months since Felicity Huffman’s release.

Once the actress began her sentence, the rumors only got wilder. OK! published an article claiming that Huffman was writing down every detail about her time in prison in order to sell it as a movie once she was released. “She’s talking to Hollywood big shots about penning a prison diary, which will become a book and a movie,“ an unnamed tipster said. “She’s already been assured it will earn millions, which is just as well because she has a ton of legal bills to pay.”

Again, it’s another rumor that’s believable at a surface level understanding of how actors live. It’s easy to think that a member of the elite that got caught up in a multi-million dollar scandal over Ivy League schools would be trying to cash in on their brief meetup with reality. The truth of the situation was far more simple and far less dramatic than the tabloids would have you believe.

Felicity Huffman pled guilty and has stuck to the conditions of her release. Every one of her actions since her arrest have indicated a desire to own up to and move past her mistakes — and profiting off a less-than-two-week stint in prison would be the antithesis of that. Lifetime came up with a TV movie shortly after the scandal first broke, but the actress wasn’t involved.

It’s also worth noting that the rumor fell apart once you read more than the headline. While in prison, Huffman would have had to be talking to producers who were talking to others who were talking to tabloids. And it’s not like Huffman is hurting for cash. She’s been a successful actress for decades, and William H. Macy’s career earnings are impressive enough on their own. Much like the divorce rumors, no pre-production whispers have emerged in the months since she was released.

Even after the completion of her 11-day stint in prison, the gossip just kept coming. In November, the National Enquirer claimed that Huffman was taunting fellow actress Lori Loughlin for not taking a plea deal for her role in the college admissions scandal. “Lori is petrified Felicity’s easy ride will make her situation even worse,” another anonymous source tells the outlet. “And Felicity’s ‘I dodged a bullet’ attitude hasn’t made her feel any better. Felicity is offering a big ‘I told you so’ attitude when anybody brings up Lori’s dire situation. She just says Lori should have listened to her advice from the beginning.”

First off, no one talks like that. Those quotes read more like a bad screenplay about some fast-talking con man than someone with legitimate connections to the actors. Second, and more importantly, both our sources and other legitimate outlets’ sources reported no animosity or plea discussions between the two. Huffman served the time appropriate for her crime, and it seems extremely odd to argue that serving any amount of time in prison is dodging a bullet or an easy ride.

There’s a reason these tabloids continue to get published. They’re inarguably good at honing in on the kinds of stories people would want to read, but they’re absolutely awful about publishing anything based in reality. As fun as it may be to come up with articles about two members of the Hollywood elite bickering, the truth of the matter is that these are real people in real situations. Coming up with constant false stories about their lives is disgusting. It’s used to sell copies of a magazine full of ads about fake miracle cures for liver spots and overpriced knickknacks — not the facts.

Here’s the truth about her life during and after prison

Like we said, Felicity Huffman’s time in the low-security prison with the roughly 1,200 other female inmates most likely wasn’t a walk in the park. However, it was neither the Oz-like experience that gossip magazines hyped up or the slap-on-the-wrist experience they used to shame the actress. By all accounts, she quietly served her time and saw no incidents or disruptions during her sentence. It’s not exciting, but it is true.

Unfortunately for the tabloids and gossip hungry, the reality of Felicity Huffman’s current situation is just as tame. ET reports that the actress is self-quarantining with her family and has been nothing short of dedicated to her volunteer work with at-risk teenage girls. She seems to be planning a return to acting sometime next year, but with the current state of the film industry and the pandemic, it’s totally up in the air as to when she’ll be back on the screen. Maybe Huffman will open up about her time in prison at some point in the future. Maybe she won’t. Either way, you won’t find any of the details about her time behind bars at the checkout at your local grocery store.

The post Truth About Felicity Huffman Adjusting To Prison And Other Rumors appeared first on Gossip Cop.