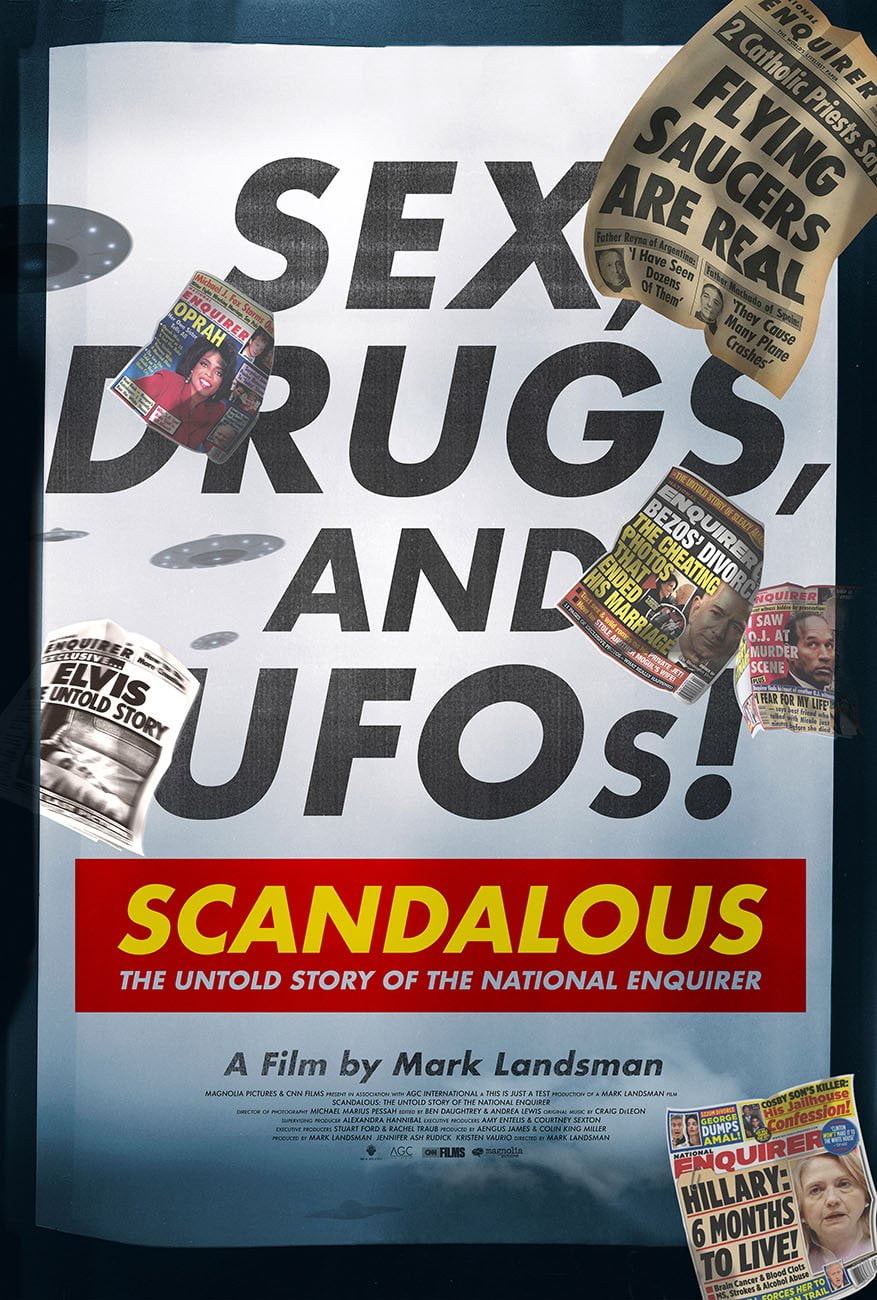 Scandalous: The Untold Story of the National Enquirer from Magnolia Films and CNN Films premieres on Sunday on CNN. The film opens with a shot of Carl Bernstein, one of America’s most esteemed journalists, saying, “[Today is] not just a bad time not just for the press but it’s a bad time for the truth.” In that respect, the Enquirer was way ahead of its time.

Throughout the documentary, Bernstein pops up again and again, making the most succinct comments about the paper. His comments cut through everything else and lay out the facts of how the paper came to be, what the goals were, and what kind of journalistic integrity the Enquirer had in the beginning, and continues to have today.

The film recounts the facts to be sure. It goes through the history of the National Enquirer starting with Gene Pope, the visionary original publisher of the tabloid, who bought the New York Enquirer, then a minor New York City paper, and changed its name to reflect a national-wide focus he was aiming for. The biggest tabloid in America was born, and over the next couple of decades, Pope led the paper to its greatest heights.

Most interestingly, the documentary breaks down the Enquirer’s questionable journalistic practices in great detail. It highlights how the outlet operated by focusing on some of its biggest early stories, like the deaths of Elvis Presley and John Belushi. The film almost romanticized these tactics, which most journalists would describe as sleazy at best. But the reporters interviewed aren’t ashamed, as they knew they were there to sell papers as much as they were there to get the story right.

One incredibly important detail the documentary came out of the 1988 Democratic primary when the Enquirer first dove into covering politics with the Gary Hart sex scandal. It’s there that the tabloid’s direction changed, and as such, the documentary does as well. While the first act of the film is more lighthearted, after the Hart story, it gets much darker, just as the paper did as well. In the nineties, nothing was off-limits, especially political figures — something that remains true today more than ever. The tabloid’s influence continued to grow.

Throughout the movie, the National Enquirer’s writers are proud of the stories they broke, the tactics they used, and the goal of the paper. They’re brutally honest and reveal why they did what they did and how they did it. The O.J. Simpson murder trial is used to show how the lines started to blur between “proper” journalism and tabloid journalism. The reporters knew in no uncertain terms they were writing news and entertainment — and they were beating the mainstream press at their own game. In many ways, it was the genesis of “infotainment.” The film also questions if it was the origin of “fake news.”

If you’re wondering if President Donald Trump is discussed, he most certainly is. He, more than anyone else on the outside, helped changed the nature of the tabloid from what it was in its first two decades into what it has become over the last two. The film goes into great detail about how important Trump was to the National Enquirer and how important the tabloid was to him in his rise from ’80s tabloid media star to president.

Scandalous is a deep dive into the world of tabloid journalism. It’s honest, and it’s fair. It exposed the dark side, like the time it sent to press a story about Princess Diana’s sex life on the night she was killed in a car crash in Paris while getting chased by the paparazzi. It also reveals the times the paper got stories right, like its long history covering the truth about Bill Cosby’s shady history with women that goes back far longer than the mainstream press’ coverage of his terrible exploits.

The movie’s final act details the rise of the National Enquirer’s current owner, David Pecker, his company American Media Inc., and how Pecker’s vision of the tabloid and the gossip media business was diametrically opposed to Gene Pope’s original vision of the paper. While the Enquirer began as deliberately apolitical, under Pecker, it has a clear right-wing political agenda. Its tactics have changed too, most importantly with the so-called “catch and kill” practice that the paper and Pecker have employed aggressively in recent years — especially in support of favored politicians like Arnold Schwarzenegger and Donald Trump. And that might be the most important part of the whole crazy story.

Scandalous: The Untold Story Of The National Enquirer premieres on CNN on Sunday, May 17 at 10 p.m. Eastern.

Why new restaurants are still, somehow, opening during the pandemic