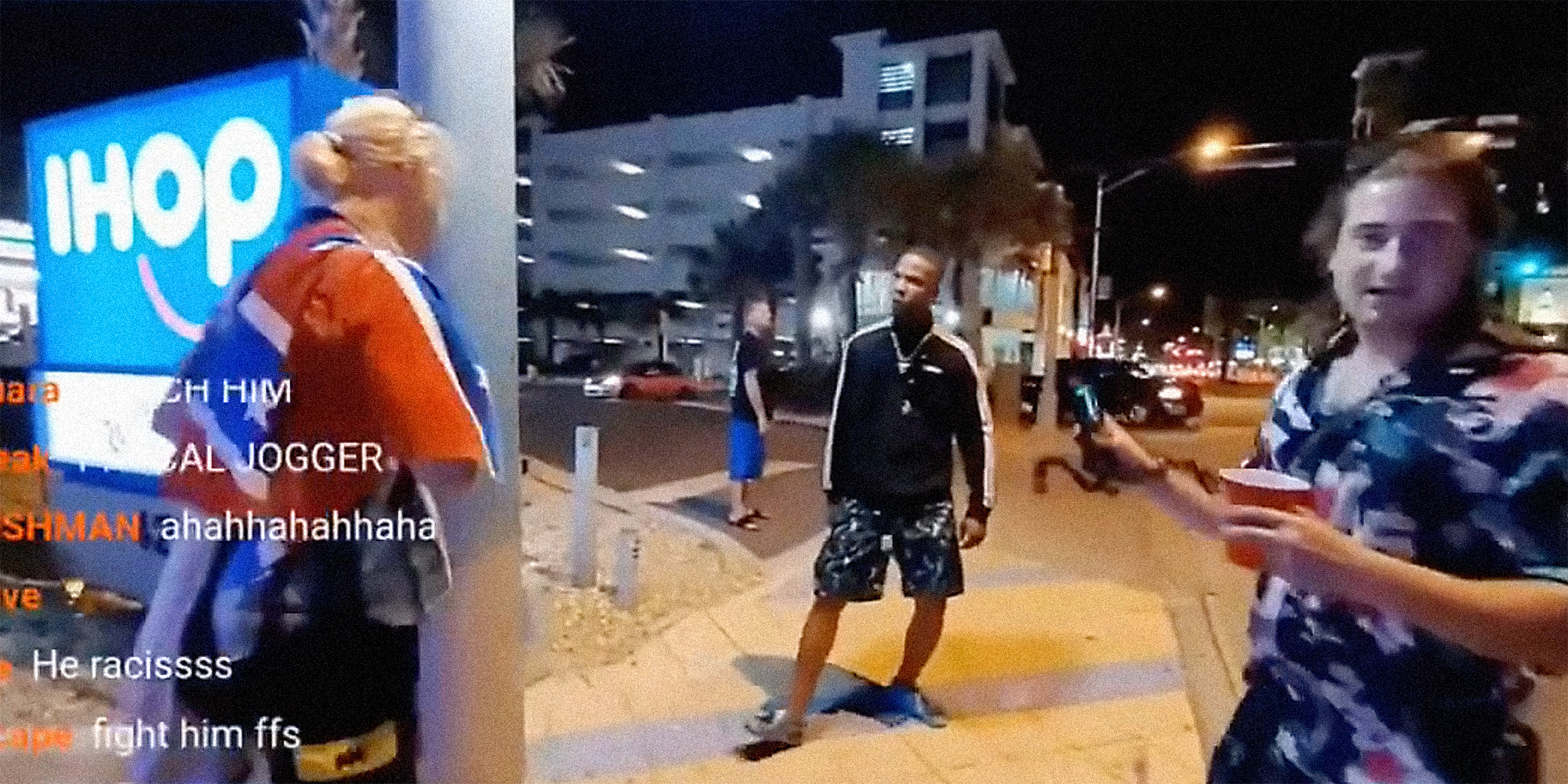 A livestream shows a man who was reportedly at the Capitol riot getting into a fist fight for wearing a Confederate flag.

In the video, a man identified as livestreamer Woozuh is walking in an urban area at night wearing a Confederate flag as a cape. A Black man comes up to him outside an IHOP.

The two go back and forth for several seconds without exchanging blows. The Black man tells Woozuh it’s “racist” to display a Confederate flag and threatens to knock him out. At some point one of Woozuh’s companions, which reportedly included a man who goes by Loulz, says they’re going to call the cops.

When the Black man starts walking away, Woozuh takes off his bag and the Confederate flag. The two fight briefly after an inaudible exchange of words. Woozuh is hit multiple times, losing his slide-on sandals in the process. As the man departs, Woozuh is sitting on the ground, shoeless and apparently dazed.

Woozuh and Loulz run in the same circle as white nationalists Tim Gionet— better known as Baked Alaska—and Nick Fuentes. Gionet has been charged with his role in the Capitol riot. Fuentes was there but hasn’t been charged with a crime.

Woozuh was reportedly also at the Capitol riot. So was Loulz, according to his Instagram posts from that day. Neither have been charged, nor is there any evidence they entered the Capitol building or performed any acts of violence.

Last month, Loulz was hit by a Black security guard after he used the N-word. On a Twitter account that appears to belong to him, Loulz claims they’re not racist.

The video appears to have been originally streamed by Loulz on the IP2 Always Wins platform, where streamers often post their shenanigans in the hopes of making a name for themselves.

A version of the video was reposted on Reddit’s “Public Freakout” page. While many redditors believe it was poor taste for Woozuh, whom Twitter user @AntifaGarfield claims is really named Jared Nobel, to display the Confederate flag, more felt that he shouldn’t have been physically attacked for doing so.

“At the end of the day, he’s allowed to wear a flag on his back, while assaulting someone for wearing a flag on their back is not allowed,” the top comment reads in part.

People on IP2 Always Wins had completely different takes. Many mocked Woozuh and his pals. “Baked Alaska Beta Squad,” one wrote on a repost of the fight.

The post Streamer who was reportedly at Capitol riot gets into fist fight while wearing Confederate flag appeared first on The Daily Dot.